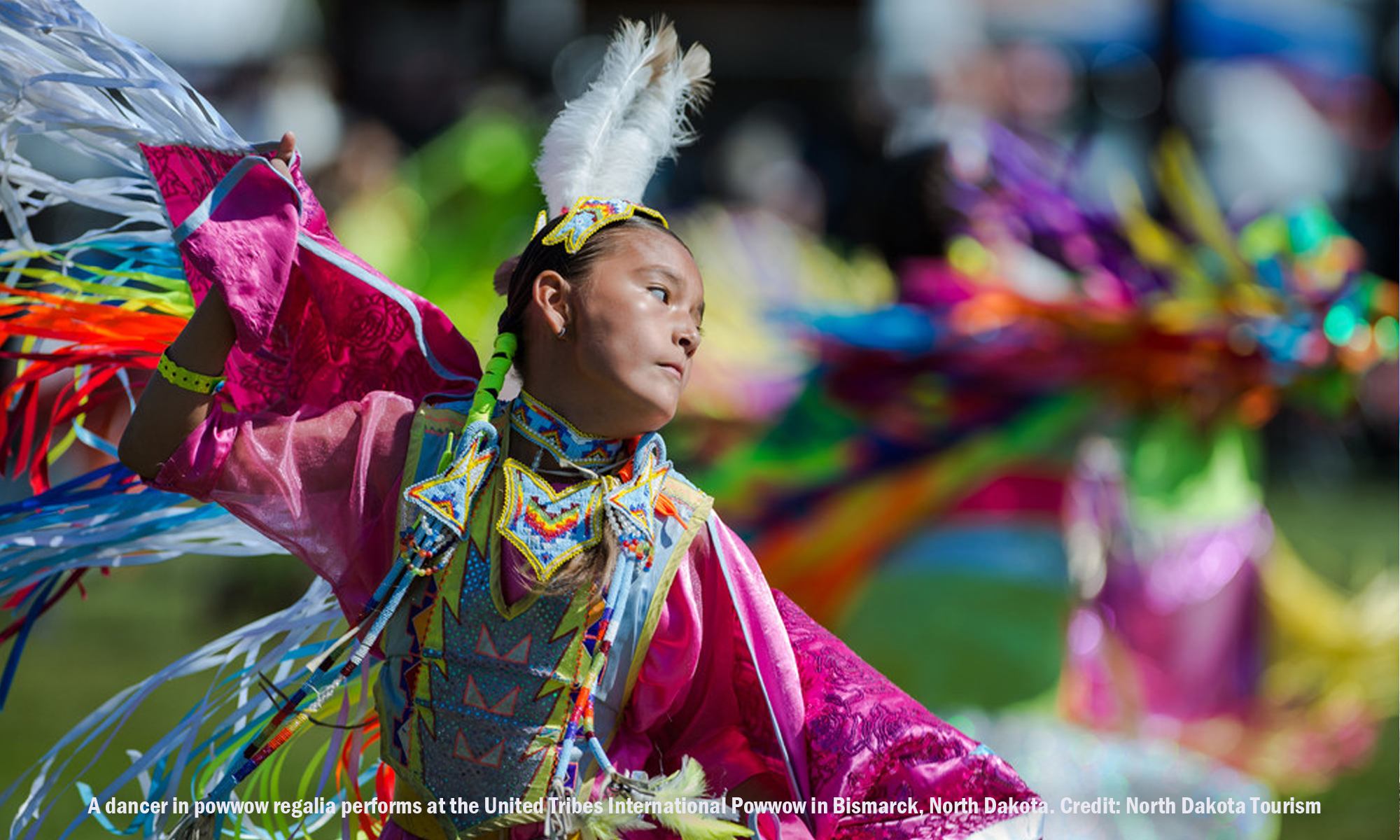 From Sitting Bull to Sakakawea, North Dakota is rich in Native American history — and with approximately 30,000 enrolled tribal members sharing geography with North Dakota, the state hosts many opportunities to interact with and experience Native American culture.

To authentically experience Native American culture in North Dakota, visitors can attend an upcoming powwow, with most held from late June through early September, as well as visit one of the state’s numerous Native American museums and cultural centers.

ATTEND A POWWOW
The Algonquin word “pau wau” was the Native American word some of the first Europeans associated with dancing. The word originally meant “medicine man” but became accepted by Europeans to refer to dancing and gatherings, later being spelled “powwow.”

The celebrations often have religious significance, but are also a time for people to gather, sing, dance, feast, pray, renew old friendships and make new ones. These celebrations are still an important part of life for many Native Americans.

Visitors to current powwows will experience a multi-day festival centered around traditional song and dance performances, traditional foods (and some favorite “county fair” foods too), as well as vendors selling arts and crafts. A list of powwows held by the different tribal nations in North Dakota can be found here.

Tour Historic Sites and Museums
The North Dakota Heritage Center and State Museum on the grounds of the state capitol building in Bismarck offers visitors an interactive and informative overview of Native American history and culture in the state. It has one of the nation’s largest collections of Plains Indian artifacts, second only to the Smithsonian. One display of note is the Native American Hall of Honors, a gallery of prominent North Dakota Native Americans and a diorama of Double Ditch Indian Village.

You can then head north of the city to see the actual remains of Double Ditch Indian Village located on the bluffs overlooking the Missouri River, as well as several other Native American villages. Visible depressions are all that remain of the large Mandan earthlodge village. Interpretive signs assist visitors in understanding the history of this fascinating village.

Additional historic villages that offer an authentic look at how Native Americans lived include Chief Looking’s Village within Bismarck providing a captive view of the Missouri River, Huff Indian Village at Huff and Sitting Bull Visitor Center, a tribute to the famous Lakota chief, at Fort Yates.

Fort Abraham Lincoln State Park is located on the banks of the Missouri River just south of Mandan, Bismarck’s sister city. The park’s history goes back more than 300 years and includes On‐A‐Slant Indian Village, which was once home to a thriving Mandan Native American population in the mid‐1600s who lived in earthlodges along the river. Several rebuilt lodges can be toured and offer a sense of what everyday life was like for the Mandan people.

The explorers Lewis and Clark traveled along the Missouri River in North Dakota, and many of their interactions with the Native Americans in North Dakota have become key parts of the history of the United States. Knife River Indian Villages National Historic Site at Stanton was home to Sakakawea before she joined the Lewis and Clark expedition. Knife River village was last occupied in 1845 by the Hidatsa and Mandan, and the national historic site is home to a beautiful state‐of‐the‐art museum and interpretive center dedicated to preserving their culture.

LEARN ABOUT THE FIVE TRIBAL NATIONS
Five sovereign First Nations share geography with North Dakota and have deep connections to the plains. Honor and celebrate their culture and modern life at some of these sites:

The Mandan, Hidatsa and Arikara Nation operates the 4 Bears Casino and Lodge overlooking Lake Sakakawea, as well as a newly opened MHA Interpretive Center in New Town that houses a collection of artifacts and art, as well as earth lodges and tipis that can be toured.

The entire Standing Rock National Native American Scenic Byway is within the boundaries of the Standing Rock Sioux Tribe’s land. Drive all or a portion of the 350-mile route, which runs parallel to the Missouri River and follows a path of Lewis and Clark, with numerous historically important sites along the way, including the final resting places of Sitting Bull and Sakakawea.

The Spirit Lake Nation includes several different nations of Lakota/Dakota peoples, many of whom live on the south shore of Devils Lake near Fort Totten. The Fort Totten State Historic Site offers visitors a look into the history of the area and the tribe, and the Spirit Lake Casino and Resort that overlooks Devils Lake is one of the area’s major attractions.

The Sisseton Wahpeton Oyate Tribe is centered around Lake Traverse tribal land which extends across the border with South Dakota in the far southeastern corner of North Dakota. The tribe operates the Dakota Winds Golf Course and the Dakota Magic Casino, both on the North Dakota side of the tribal land.