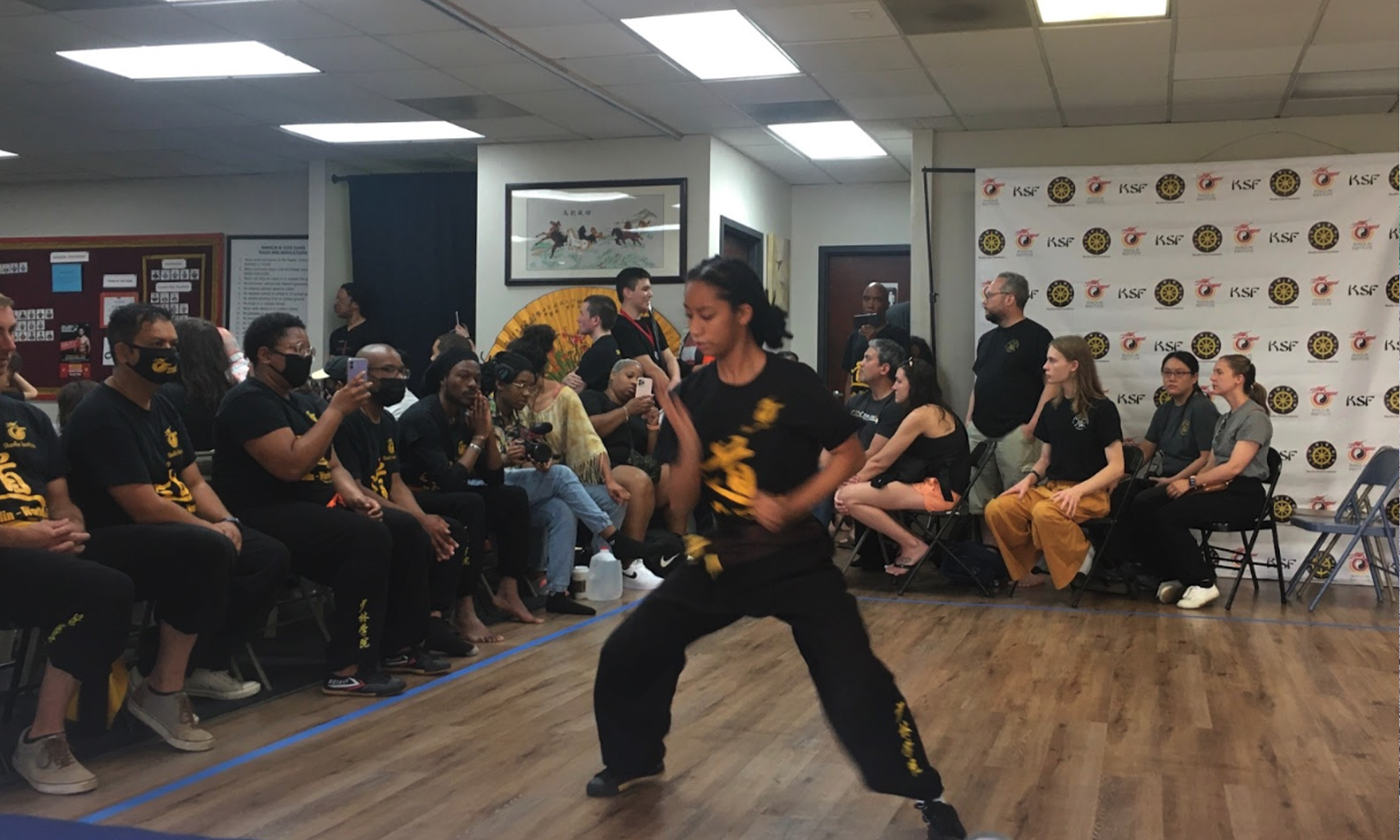 The KSF (Kung Fu Sanda Federation), which hosted the US Open Kungfu Challenge 36, is part of Shaolin Chan Foundation (a non-profit organization promoting Asian wisdom, natural healing, health, and martial arts. Co-promoted by Cung Le and his coach, DeRu Shi (Shifu), the US Open Kung Fu Challenge was a special event that gathered not only some of the most well-known original US Sanda/Sanshou team members and masters but also many younger fighters and coaches who have participated in our Sanshou/Sanda events. Throughout the event, a particular theme seemed to be developing. It’s the evolution of kung fu, which was evident in the many generations of competitors present.

DeRu Shi was a coach to Cung Le. In turn Cung Le became a coach to others. Students that he taught, such as Tye Tonkin, carried on the teaching of Sanda tradition to his own students. The respect for the sport is handed down to each new student and instilled in him or her as they learn. There were many generations of students and coaches there including Le’s own son Anthony Le. Many of them started with DeRu Shi, who was the first to train Sanda in late 1980s in the US, and first promoted Sanda only event with official Sanda rules only in early 1990s. Each new generation takes what was taught and tries to add something more to it. This shows evolution.

During the day on June 11th, many competitions consisting of traditional Kung Fu, Tai Chi, and other martial arts forms, weapons and light contact competitions, as well as continuous sport sparring with limited light contact and youth Sanda took place. The event ran smoothly and in a timely manner. Guests and competitors alike remarked how much they enjoyed the competitions and the overall positive atmosphere. It’s a place where students of all skill levels, ages ranging from young to teen to adult, male or female, can participate in their area of expertise and get feedback from judges and audience members.

Some of the judges and referees for the tournament have extensive experience fighting for DeRu Shi, and they were honored to come back and be a part of this event. Some of those were as follows. There were co-chief referees Scott Sheely, who is a US Sanshou Champion and US team member and MMA Fighter who fought and won at the US Open and National Team trials, and Aaron Honeycutt who is a world Sanshou Bronze medalist and US Sanshou champion. Champions from past events such as the US Open and Art of War super-fight who came to help judge are fighters like Steve Dang, Robert Pritchett, and Dustin Carbajal. Shaolin Institute leaders such as Mario Salazar, Scott Keller, Sunshine Hebert, Vatsana Chanthala, and Darvwn Gibson also participated in judging. Many of Shi Deru’s past students who now run their own schools, such as Cung Le, Mario Salazar and Jeff Bordelon, brought their students to compete as well.

Early afternoon saw the beginning of the light sparring matches and preliminary bouts of Sanda. These matches led up to the evening’s main event, which consisted of full contact Sanda matches. Judges and Chief Referees for the event were all past students of DeRu Shi, who came back to take part in this historic event hosted by their beloved coach.

The night event was made up of two main divisions—B for beginners and A for Advanced. In the A division, top winners in two different weight categories were awarded with a scholarship of $1000 each. The two winners’ names are Anthony Le, representing Team Cung Le, and Michael Calhoun, Jr., representing Immortal Academy. The General Manager of the KSF said this: “It was so exciting to see these competitors face their fears to get in the ring, give it there all, and then, whether they won or lost the match, they stayed humble and had much respect for their opponent.”

Sanda is a very exciting sport. Sanshou, or Sanda, developed from Kung Fu like Bruce Lee’s Jeet Kune Do, is a growing sport. Sanda’s popularity is on the rise, and together we will reignite the world’s interest in Sanda. “The exciting new era of Sanda is coming,” said DeRu. The evening matches, as mentioned above, were full contact. Spectators were able to see a variety of skill levels and techniques used throughout the matches. Some were partaking in their first ever Sanda bout while others had more experience and were revisiting the ring. The crowds and judges were treated to exciting rounds filled with well-matched opponents who exchanged various styles of strikes, kicks, and takedowns throughout the evening. It was truly a sight to behold.

Next up for DeRu Shi’s students will be an intensive training camp, which will take place next month. Be on the lookout for an upcoming documentary on this event that will show you many highlights, the multitude of competitors and students (past and present), and the absolute evolution of Kung Fu.